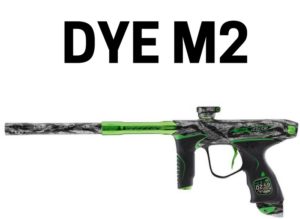 The Dye M2 Paintball Marker is Available at Amazon.com

There are just too many things to praise about this gun. Just too many. Go over to any review site and you will see that there is nothing but positive opinions about this gun. Almost 0 negative reviews. That is just hard to do in this Internet world where people drop the dislikes for the silliest of reasons. The Dye M2 is also often the unanimous choice when it comes to choice of best speedball gun, for beginners, intermediate or tournament players alike.

Let’s start off with the screen. The 1′ super-bright, full color OLED screen play screen will show you eye system status, the 1 of 5 profiles that you have selected, battery level, shot counter, anti-bolt stick status, service schedule, dwell settings, hyper pressure, LPR pressure, average rate of fire and peak rate of fire. What more could you possibly want. You have both critical game data and system data available in a easy to view screen, right out of the box, with the Dye M2. The 1′ screen has a maximum brightness level of 90 Lumes which is insanely high. Also, the contrast ratio is 10,000:1 which is also ridiculously high. No matter what the glare from the sun, this screen is going to outshine it.

If for some reason you are not satisfied with this screen and want more, you can go in for the MOS Air upgrade kit that will give you a screen that you can customize colors with. Besides giving you extra customization of the screen, MOS Air will allow you to wireless charge your Dye M2 by placing it on a neat looking charging mat. More importantly, the MOS Air allows you to actively track personalized sub-systems on your Dye M2, so you are notified of critical system data as and when it happens, while you focus on taking down your opponents.

The 5-way joystick makes navigating through the hundreds of potential screens a breeze. The learning curve on using the joystick is extremely short, as it is intuitively designed to maximize synchronizations with the prism interface of the gun.

Are you primarily going to be using the Dye M2 for tournaments? After all, the gun was designed as a tournament specialist. If you are new to tournament matches, the Dye M2 gives you three fantastic training modes with which you can get accustomed to. If not for these training modes, the only other way to get used to tournament scenarios is to go out on the field, along with pros, and get painfully painted.

The first training mode is called the breakout drill, helping you improve speed and also improve your accuracy levels, right out of the starting box. The Dye M2 will beep and give you cues as to when to shoot and will also give you average response times at the end of 5 training sets. It also has a snapshot drill training mode to test your muscle reflex times from behind cover. Lastly, there is the rate of fire training mode that purely tests your trigger response times. What is fantastic about this particular training mode is that it will work without gas or paint and still give you statistics such as your highest and slowest BPS and your average BPS.

Remember that time you were frantically asking everyone and someone to lend you a battery. The Dye M2 has a large rechargeable battery that will last you a staggering 100,000 shots on one full charge! Your tank will obviously run out a lot sooner than your batteries.

It is not just the battery life that is impressive. The ease with which you can charge the gun is also fantastic. Pop off the dust cover on the upper left side of the super sticky grip and use any standard micro USB cable to charge your gun. If you use the MOS Air upgrade, you can simply lay the gun down on the charging mat to charge it inductively, without wires. It however takes longer to charge it this way, without cables.

When charging, you will see a blinking blue light which indicates that the gun is charging and has less than 95% charge. It will change to a blinking green light when between 95% and 99% charge and will become solid green when 100% full. A half orange light indicates 30% to 69% charge and a battery with just a little red indicates less than 30% charge. It is highly recommended that you do not use the gun when charge is less than 30% as the weak battery can effect critical system components like eyes.

The patented Billy Wing spool valve operates at a very low 135 psi (HPR) (LPR is 65), giving you unheralded gas efficiency, especially when you consider the gun’s super-performance level. The low operating pressure also means that your groupings are going to be very tight. A lot of paintball players want tighter grouping rather than range in tournament modes and this gun gives you exactly that. That said, range is pretty impressive on this gun as well.

The Billy Wing Bolt also produces very negligible recoil. Besides the first few shots when you initially fire the gun, you will almost never notice the recoil afterward.

Efficiency tests on a cold fill at about 4,000 PSI shot balls (Millennial Mode) at about ~282 feet per second for the first few pods.  Here’s the breakdown.

The box that comes with the Dye M2 has a very neatly laid out O-ring map that will quickly help you figure out what O-ring goes in which part of the bolt. Since the O-rings are also color coded, you just can’t go wrong as long as you use a little application in maintenance.

The airport ASA is bigger and better and the screw is super durable. It is also adjustable in the sense it can be moved up and down.

The trigger is just so smooth, thanks to the elimination of the spring. The magnetic system still gives you a 20 point adjustable play, while keeping it super smooth in any of those 20 settings.

The gun has a very low profile and with a high quality hopper like the Dye Rotor 2, you are going to have a rotor that holds about 200 balls while still keeping height really low, allowing fantastic view down the field.

The stock is pretty amazing and we actually don’t recommend a barrel upgrade for this awesome gun. But, if you are the type that just can’t play with a stock barrel, even if it is just for the heck of it, you can look at the Dye Precision GF Broomstick Barrel. It comes in 8 different color options and will cost $180.

By the way, you get two stock barrels with the Dye M2. One is a .684 bore and the other is a .688 bore. The barrels are 6.5′ in length and the tip (included) is about 7.5′, essentially giving you a 14′ barrel. Though only acutely different, you can swap to a particular barrel that will give you just that extra oomph when you try paintballs from different brands, or when you use old paintballs that might have expanded just a little from just sitting around.

You might also find the two stock barrels useful when you have to switch between the two in different weather conditions. Both are extremely lightweight and very durable.

Like we mentioned before, we were left searching when we tried to find at least a few gripes about this gun. If anything, we would probably just say that it sucks that it costs $1,500 (though it deserves that price) as it may be beyond the budget of the average paintball player. Otherwise, all we can say is get the gun if you can afford it as you will never shoot with anything better on a paintball field.

Whichever way you look at it, there’s no gun out there that can beat the Dye M2 when it comes to sheer performance. If money isn’t a problem, the Dye M2 is a THE paintball marker to buy, even if it is costs almost $875! Buy it from Amazon, here.